Ryan Smith is one of the top up and coming golf instructors in the state. First, got into golf at the age of 2 and has been playing top level golf since he was a junior.

In 2004 he was named Tennessee junior golfer of the year and moved on from there to play division one college golf at Tennessee State University.  While earning a degree in Exercise Science, Ryan led his team to a NCAA Division I National Minority Championship in 2008 and won two individual titles.

Seth Grissom.  Is one of the top up and coming teachers in the South East for players of all skill levels from beginner to elite. He has been involved with the game of golf all of his life since the age of 4 years old. He starting playing competitive golf at the age of 8 and competed locally and nationally all through junior golf, and  high school. Then he attended Cumberland University on a golf scholarship and studied Social Science. After college he played on various mini tours across the country. He began working in the golf business at age 15 and seven years later became the Assistant Golf Professional and Instructor at Nashboro Village Golf Club. He also was the Assistant Golf Professional and Lead Instructor at Indian Hills Golf Club and now is the Manager, Lead Instructor, Certified Club Fitter and Repair technician at Golf RX

Steve Kirkpatrick has been a Class A PGA Professional since 1989. He is a graduate of Western Kentucky University with a B.S. Degree in Industrial Technology. Steve has been in the golf business since 1987. 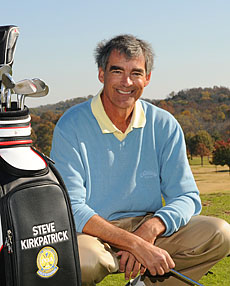